How Palestinian’s treat their own: Hamas supporters dragging the body of a Muslim Palestinian man behind a motorcycle in Gaza City. They were yelling that he was a ‘spy’ for Israel. Forget any evidence or a hearing! That is not important to terrorist organization Hamas to which human life has no value. 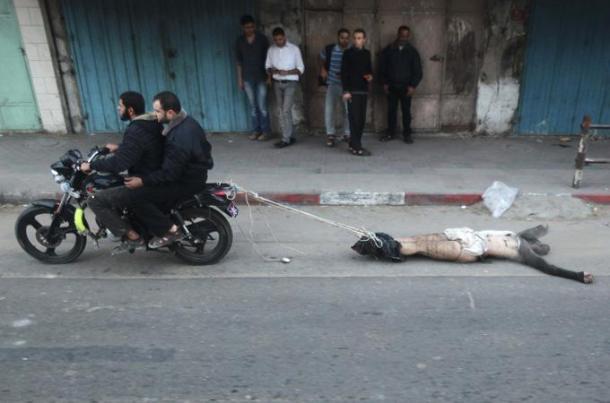 Palestinian civilians take pictures of bodies of men, allegedly Israeli collaborators, after they were shot dead Tuesday. The victims had notices pinned to their bodies saying they had been killed by Hamas’s armed wing.

Some in the crowd stomped and spit on the bodies. A sixth corpse was tied to a motorcycle and dragged through the streets as people screamed, “Spy! Spy!”

The Hamas military wing, Izzedine al-Qassam, claimed responsibility in a large handwritten note attached to a nearby electricity pole. Hamas said the six were killed because they gave Israel information about fighters and rocket launching sites.

The killing came on the seventh day of an Israeli military offensive that has killed more than 120 Palestinians, both militants and civilians. Israel has launched hundreds of airstrikes, targeting rocket launching sites, weapons caches and homes of Hamas activists, as Palestinians fired hundreds of rockets at Israel.

Israel relies on a network of local informers to identify its targets in Gaza.

The public slayings come the same day a senior Hamas official confirmed that it is close to a cease-fire deal with Israel.

Gunmen ride a motorcycle as they drag the body of a man, who was suspected of working for Israel, in Gaza City Tuesday.

The six were killed on Tuesday afternoon in Gaza City’s Sheik Radwan neighborhood.

Witnesses said a van stopped in the intersection, and four masked men pushed the six suspected informers out of the vehicle. Salim Mahmoud, 18, said the gunmen ordered the six to lie face down in the street and then shot them dead. Another witness, 13-year-old Mokhmen al-Gazhali, said the informers were killed one by one, as he mimicked the sound of gunfire.

They said only a few people were in the street at first — most Gazans have been staying indoors because of the Israeli airstrikes — but the crowd quickly grew after the killings. Eventually several hundred men pushed and shoved to get a close look at the bodies, lying in a jumble on the ground. One man spit at the corpses, another kicked the head of one of the dead men.

“They should have been killed in a more brutal fashion so others don’t even think about working with the occupation (Israel),” said one of the bystanders, 24-year-old Ashraf Maher.

One body was then tied by a cable to the back of a motorcycle and dragged through the streets. A number of gunmen on motorcycles rode along as the body was pulled past a house of mourning for victims of an Israeli airstrike.

Gunmen pulled the body past a house of mourning for victims of an Israeli airstrike.

There is broad consensus among Palestinians that informers for Israel deserve harsh punishment, and it is rare to hear someone speak out against killings of alleged collaborators. Such public killings been carried out in the West Bank and Gaza since the first uprising against Israeli occupation in the late 1980s.

In Israel’s last major Gaza offensive four years ago, 17 suspected collaborators who fled after their prisons were hit in airstrikes were later shot dead in extra-judicial killings.

During the current offensive, Tuesday’s killings brought to eight the number of suspected informers being shot dead in public. On Friday, the body of one alleged informer was found in a garbage bin, and another was shot dead in the street. Hamas claimed responsibility for both killings.

Since seizing Gaza in 2007, Hamas has executed four informers by firing squad, and about a dozen more are on death row in Gaza. 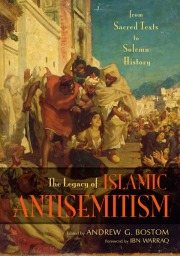